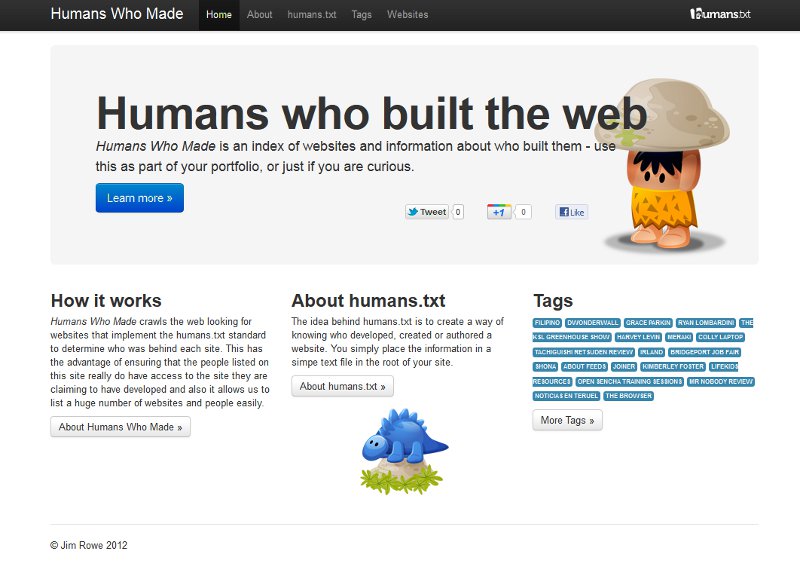 After a few weeks of development I have finally decided to “go public” with a new site I have designed and developed. Drum-roll if you please…

The site is basically an index of humans.txt files that forms a directory of sites and the people who actually built them. The idea for humans.txt files themselves comes from the people over at humanstxt.org and the idea for indexing the files using a crawler, rather than by submissions is down to me. Turns out that crawling web pages is actually pretty tricky and so I am sure there are a few false-positives in the data but at the moment I have somewhere over 600 humans listed.

A humans.txt file is a simple plain text file that you can place in the root of your site with information about who built and designed the site, along with the kind of technology that was used. The reason for doing this in a separate file is that the people who build a site are more often than not, not the owners of the site – and the owners clearly don’t want to plaster their site with this information. The humans.txt file is a really nice solution to this as it has zero impact on the site itself and can also only be placed on the site by somebody technically involved with the development/hosting.

A humans.txt file can be in any plain text format, although UTF8 character encoding is encouraged, and their is a sample layout that can be used as a guide. As this file is for humans to read the emphasis is simply on clarity and gives people the chance to express themselves by injecting a little humour, or inlcuding ASCII art etc. into the file.

What is Humans Who Made?

Humans Who Made is a directory of humans.txt files put together by spidering the web. The reason for doing this is to make the information in the humans.txt files more widely availible; most sites don’t link to their humans.txt file so unless you know to look for it you won’t ever see it.

In time I am sure this information could be put to all sorts of uses but at the moment the primary use is to give technical people the ability to see who and what technology is onvolved in a site. This is often of casual interest but also helpful when investigating and learning about frameworks and their use. The second obvious use is as a portfolio for web designers and developers to prove their involvement in a website. As only technical people in a project can put the humans.txt in place their is a level of proof that the people in the file really were responsible for the site at least on some level.

To further this idea of a portfolio I am going to look to expand Humans Who Made in the future to index the content of the humans.txt files and try to extract peoples names, roles and technology to be able to lst sites created by specific people, organisations or using certain tech.

So, thats about it – please take a look at the site and any feedback is welcome.