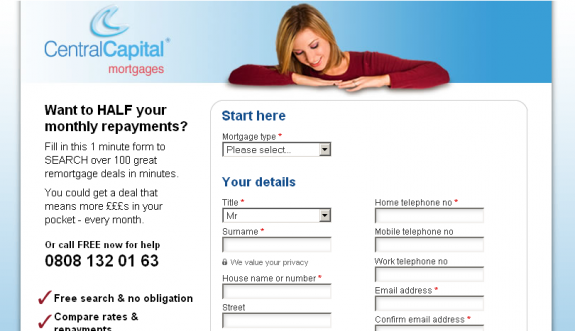 The Central Capital Mortgages site has been running for a number of years with limited profitability. My redesign has made huge improvements and at present other marketing campaigns have been suspended to concentrate on PPC as it has become the most profitable channel for the business. The site went live Jan 2007.

This new design went live 26th Jan 2006 and had an immediate impact, with the conversion rate moving from 3.3% to 7.7% on the remortgage PPC keyword on google. The site featured a single long form rather than several shorter pages, images were used sparingly only to direct the user to the form and it used shorter copy than previous versions of the site. Also the site removed the normal navigation features (such as a home link) which we believe contributed hugely to this improvement.